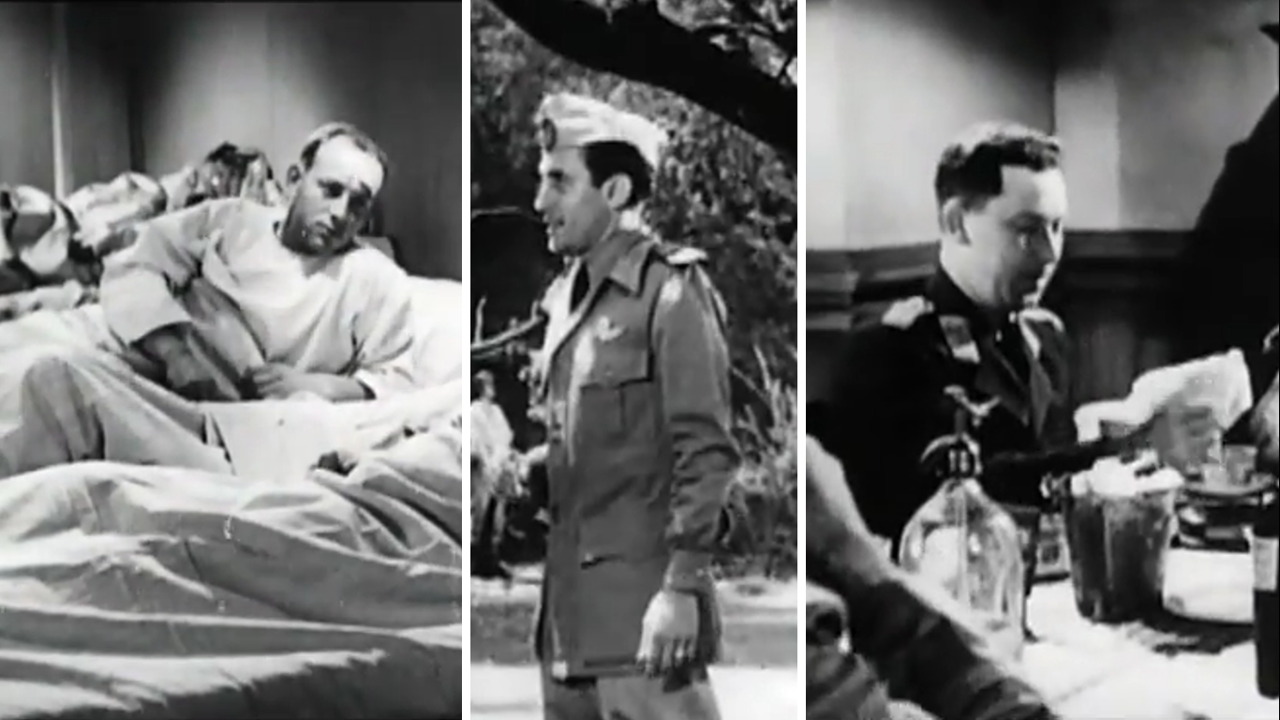 When someone is an obvious interrogator asking questions, that technique is called the direct approach. You might assume that this is the only form of interrogation there is, aside from torture.

That is naïve — and a naïve person is what most interrogators hope for.

Imagine you get questioned by someone who is not an obvious interrogator.  For example, has a stranger ever struck up a conversation with you?  Were you flattered by the attention?  Did you answer just to be polite?  What did you really know about that person?  Were the circumstances purely by chance?  How do you know?

An enemy holding you in captivity has plenty of ways to trick you into talking, including the indirect approach.  Three variants are depicted in the film Interrogation of Enemy Airmen.

The first depiction shows a man in a hospital bed.  Voiceover: “This German pilot, brought down over England, is in a prison hospital, recovering from his wounds.”  Another man lies in an adjacent bed.  “And this man?  As good an American as you are.”   In fact, he is an interrogator disguised as a fellow prisoner undergoing medical treatment. 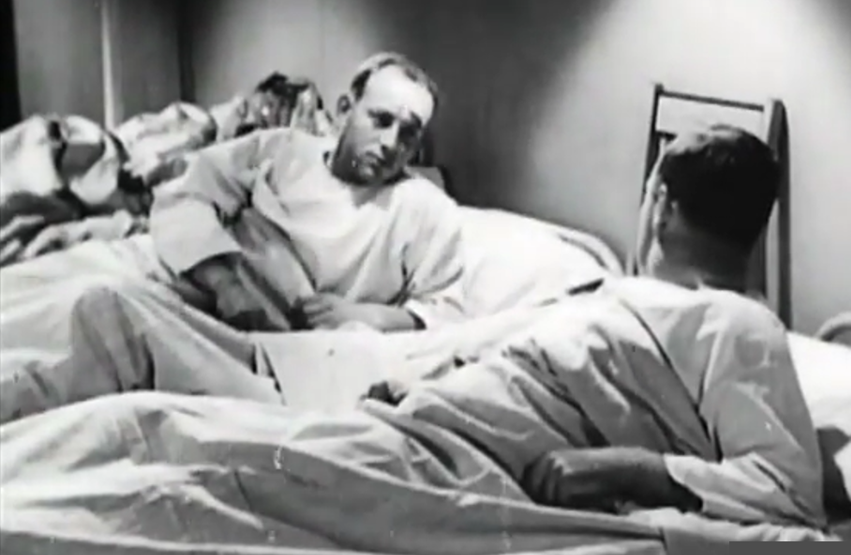 Earlier, the voiceover tells us, the German pilot was subjected to the direct approach by an obvious interrogator, but that interrogator learned almost nothing.  So the German is now being tricked into talking to a hospital “friend.”  The voiceover remarks, almost as a warning, that “Hospitals are good places in which to share confidences.”

The second variant depicts a prison yard, including a building labeled “Quarantine.”  Out steps an Italian officer, squinting in the sunlight.  Voiceover: “This man was told a contagious disease was floating around and prisoners had to be quarantined.  For three days, he’s been kept in a dark room without company, or reading matter, or entertainment of any kind.  Now, he’s being let out for exercise with a few fellow prisoners… After three days of being pinned up alone, this Italian feels like talking.” 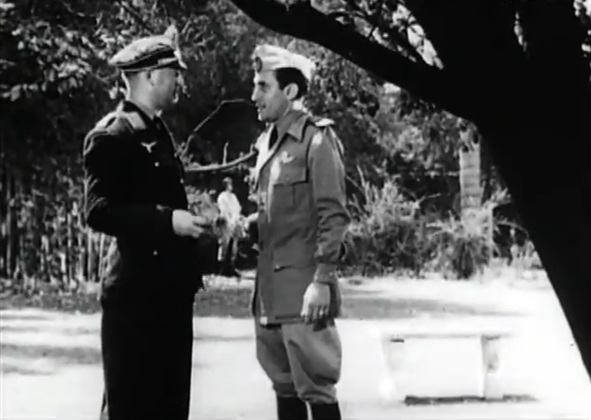 A German officer walks over, greets him and offers a cigarette.  As they talk, the German officer appears a bit anti-Nazi and even apologetic about how the Germans have mistreated their Italian allies.  Learning this, the Italian is quite appreciative, enough to confide his views.  The voiceover reveals that the German is not a German at all, but an American interrogator in disguise.

The third variant shows a fancy dinner party: a captured German officer, a pilot, is being feted by American pilots.  The occasion is civilized — but also an indirect interrogation, encouraged by alcohol. 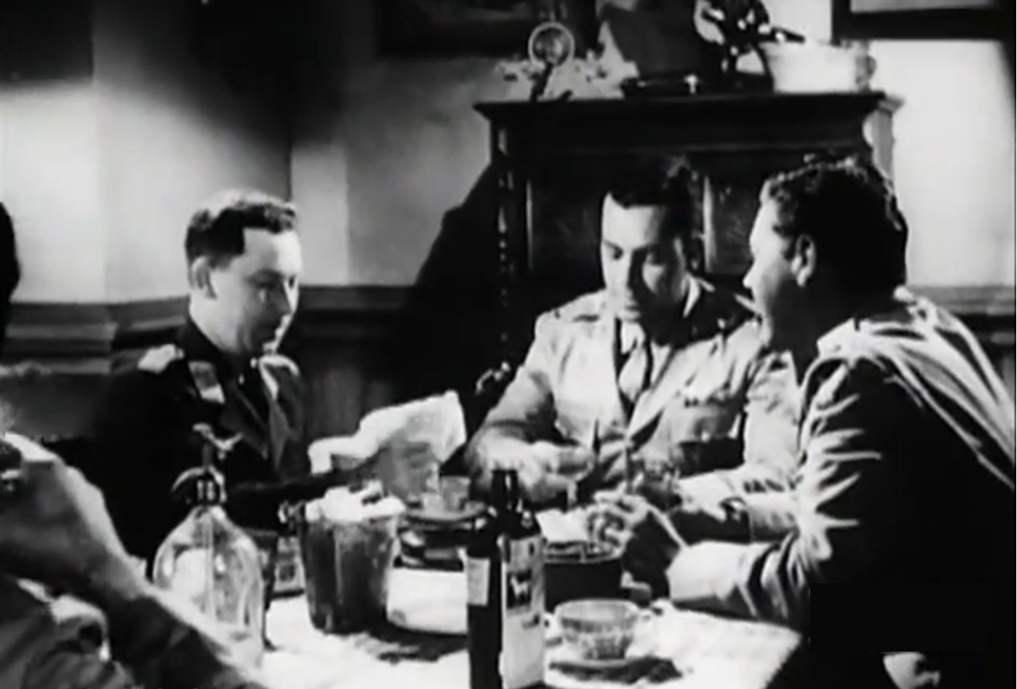 Voiceover: “Loosening a prisoner’s tongue, entertaining him with fellow pilots, who by prearrangement will soon start boasting about their exploits and experiences.  And it won’t be long before Jerry tries to top them.  And then this [American interrogator at the table] will prove an interested listener.”

Among the reasons why I like the film Interrogation of Enemy Airmen is because it portrays the prisoners as people with depth.  Not as one-dimensional caricatures of “the enemy” but as likable individuals, entangled in a terrible war but trying their best.  Only Lieutenant Wedler appears a bit less likable, having a reputation for brutality according to his file, but we also learn that he is a courageous and proficient pilot.  In person, he’s just a young arrogant lieutenant, and frankly every military organization has a few of those.  One can feel sorry for the prisoners when they get tricked into talking, but trickery is better than torture.  In enemy captivity, too many Allied soldiers suffered worse.

The film ends with a reminder to its original audience that they are at war, a world war, and that they have a job to do:

“Every day on all our fighting fronts these man-to-man contests are taking place.  The advantage lies with the interrogator, but he has to know how to use it.  Every prisoner presents a different problem.  But Jap, or German, or Italian — all are human underneath.  Our interrogator’s job is to play upon those weaknesses, to dig out the important information of the enemy’s situation and capabilities to help make up the complete intelligence picture.  On this depends every vital action, from here to victory.”

When viewing this film today, we have the benefit of hindsight.  When interrogating prisoners, is it heartless to play upon their weaknesses and use trickery?  To that question there could be as many answers as there are tricks.  But the hindsight of history tells us that two of the most successful interrogators in the Second World War were anything but heartless.  The techniques and advice of Sherwood Moran and Hanns-Joachim Scharff make for fascinating reading.  Their stories are available on this website.