About the Donovan Institute and its namesake

Strategic Intelligence is detailed information, typically on many subjects, whose purpose is to help devise and refine a strategy for achieving one’s goals.  The Donovan Institute makes use of prominent expertise, sound analytical tradecraft, advanced graphics and Big Data capabilities to offer Strategic Intelligence on almost any topic, via both traditional and non-traditional media.  Only through active public engagement can the Donovan Institute accomplish this mission, offering objective expertise, not partisan bias. 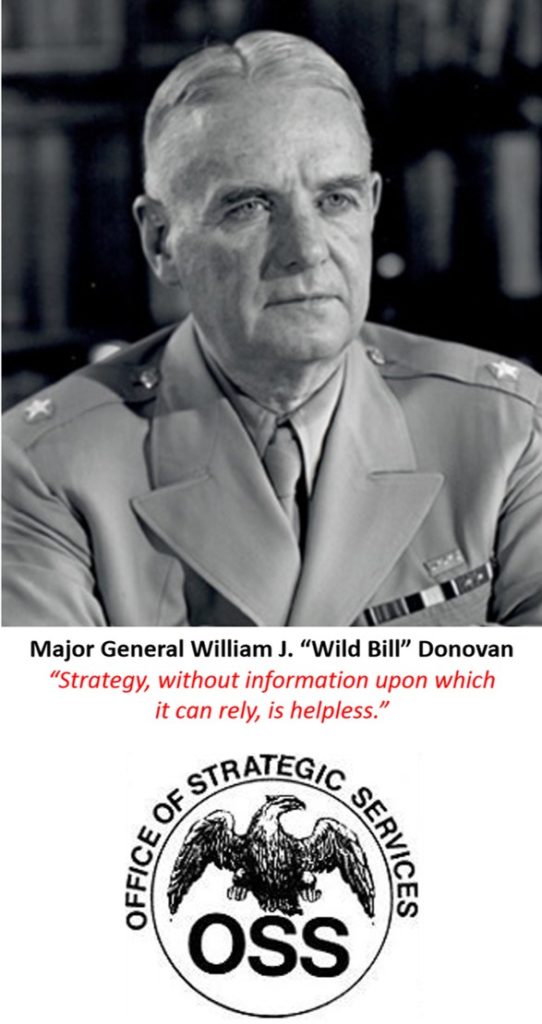 When President Dwight Eisenhower was informed of the death of Major General “Wild Bill” Donovan in February 1959, the saddened President remarked, “What a man.  We have lost the last hero.”

Not really the last hero, of course, for there are plenty alive today, but the hindsight of history has not diminished what a remarkable man Donovan was.  During the First World War, his combat service as a regimental commander earned him the highest medals the United States can bestow: the Congressional Medal of Honor, the Distinguished Service Cross, the Distinguished Service Medal, and the Silver Star.  After the war, he helped to found the American Legion, the national veterans organization that continues to work for veterans’ concerns.

Those achievements would have secured his place in history, but his greatest legacy was yet to come.  During the Second World War, Donovan created and directed the Office of Strategic Services (OSS)—the forerunner of today’s Central Intelligence Agency (CIA) and, less officially, of the U.S. Armed Forces’ elite Special Operations Command (SOCOM).  Donovan created the OSS largely from scratch, beginning in 1942.  By 1945, the OSS had grown to more than 13,000 personnel—a myriad of experts ranging from intelligence analysts to guerrilla fighters.  The exploits of the OSS are now legendary, but with the war’s end the OSS itself was ordered disbanded, despite Donovan’s warnings that a national intelligence service was still needed.  He was accurate, and in 1947 the CIA was created.

Donovan never headed the CIA and he died long before SOCOM was created in 1987, but both organizations consider him a founding father.  A full-size marble statue of General Donovan stands in the lobby of the CIA Headquarters building, and his portrait holds an honored place alongside portraits of the Agency’s past directors.  Four CIA directors—Allen Dulles, Richard Helms, William Colby, and William Casey—were once OSS employees.

Donovan the soldier-spy was also a principled humanitarian.  As early as 1915, before America’s entry into World War I, he traveled to wartime Poland as part of a Rockefeller Foundation commission to speed food aid to war refugees, especially children.  Thirty years later, in the aftermath of World War II, he was a member of the U.S. delegation to the Nuremberg War Crimes Tribunal, established to prosecute captured Nazi leaders for crimes against humanity.  One of the last missions of his OSS was to supply the prosecution with documentary evidence the OSS found in captured Nazi files, photographs and films.  Later, in the last year of his life, Donovan received the Freedom Prize from the International Rescue Committee (IRC).  He is buried in Arlington National Cemetery.

The William J. Donovan Institute for Global Strategic Intelligence honors its namesake through its dedication to many national and international causes that General “Wild Bill” Donovan himself was devoted to:

― Educating the Public, including leaders, about how the U.S. Intelligence Community (IC) works and especially about Strategic Intelligence.  Strategic Intelligence is detailed information, typically on many subjects, whose purpose is to help devise and refine a strategy for achieving one’s goals.  Yet, popular obsessions with immediacy, with the latest headlines or loudest event, have so shortened the average attention span and skewed common priorities that research into Strategic Intelligence has languished.  General Donovan recognized that Strategic Intelligence demystifies events by placing them in context, revealing threats and opportunities, and it offers insights that can alter strategic priorities—rendering it essential to governments, private businesses, non-governmental organizations (NGOs) and security personnel.  Even if they don’t always appreciate it until they see it.

― Producing Strategic Intelligence through multidisciplinary Research and Analysis (R&A) and scientific critical thinking.  These are among the most important reports the Donovan Institute produces, as was true of General Donovan’s OSS.  Furthermore, since Donovan himself—as a businessman, attorney, and law-enforcement official—was as concerned about America’s affairs as about events abroad, the Donovan Institute’s production of Global Strategic Intelligence includes analyzing the United States.

― Recommending when and how to employ, for strategic effect, Special Operations Forces (SOF) and Unconventional Warfare (UW) abroad. General Donovan helped to pioneer both SOF and UW.

― Active cooperation with the news media.  General Donovan personally practiced this, despite his often secretive work, for he recognized the democratic importance of the news media.

― Active opposition to the forces of totalitarianism and genocide.  Through Donovan’s own travels and research, he recognized early the threats posed by Nazism and Communism.  Later, during World War II, much of what the U.S. Government knew about the Holocaust came from OSS sources.  Today, to help prevent future mass atrocities, the Donovan Institute is committed to providing strategic early warning of totalitarian threats and to identifying their vulnerabilities.