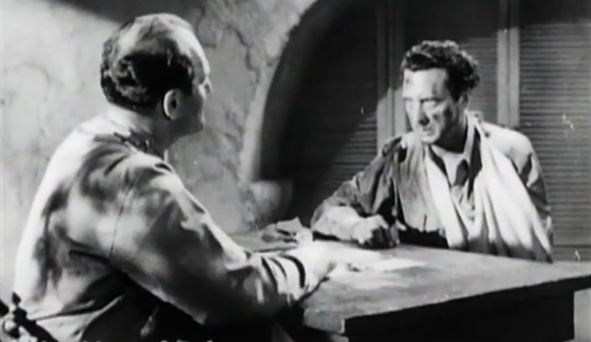 Our review continues of the U.S. Government training film Interrogation of Enemy Airmen.

In 1942 and 1943, the Western Allies fought the forces of Fascist Italy and Nazi Germany in North Africa.  The movie scene shifts to a bombed-out building somewhere in North Africa, although the location looks otherwise peaceful.  An Italian flyer, a sergeant, his arm in a sling, is undergoing questioning by an Air Interrogation Officer (AIO), presumably an Italian-American.  Both are seated on opposite sides of a portable desk.  They speak in Italian.

“I’ll return your belongings after some routine questions,” the AIO assures the Sergeant.

“I’d appreciate it,” the Sergeant replies with a smile.

“You had a narrow escape.”

Then the AIO asks, “You believe in astrology?” 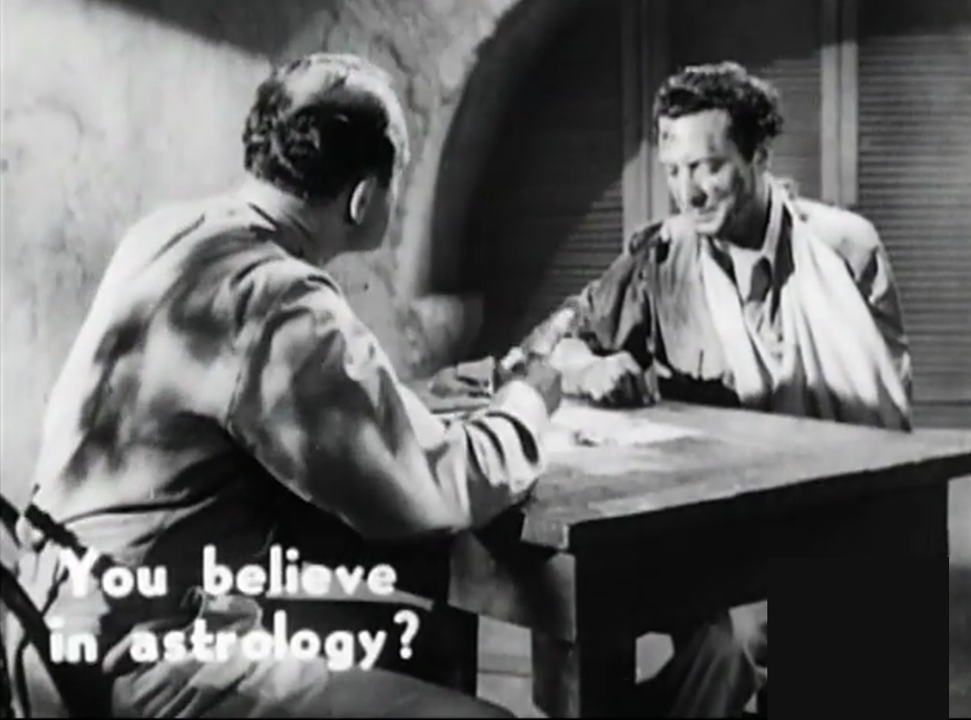 The question surprises the Sergeant.  “Hitler believes in astrology,” he declares with obvious contempt.  “Not me.”

“Do Germans at your base?”

“I don’t know.  Nor care.”  The Sergeant appears irked.

“They use Italians as slaves, digging dirt.”

His contempt for Italy’s Axis partner is as obvious as ever.

“Oh, of course, defense works.  Tell me, have you flown many years?”

“Ten or twelve.  Before, I was an auto-racer in Milan.”

“Really?  I’m a car-racing enthusiast myself!  Ever hear of Ralph di Palma?”

“Yes!” A smile spreads across the Sergeant’s face.  “A compatriot of my father’s!” he says excitedly.

“Incredible!” responds the AIO.  “Why is a man of your experience only a sergeant?”

“Some officers don’t recognize a good man.  Tell me, these defense works, what are they defending?”

“Of course not.  Ever been to America?”

“Wonderful place, you would like it — especially Providence, Rhode Island.”

“You’ve read my letter,” he says with another smile.  Presumably the letter was among the Sergeant’s belongings that the AIO mentioned earlier.

“Too bad I must turn him over to the FBI.”

“Our secret police,” answers the AIO.

“Your uncle lives in America, yet he’s been sending money to our enemy.  We’re cracking down on his kind.”

“The money was only for my mother!”

“And she gave it to the Fascists.” 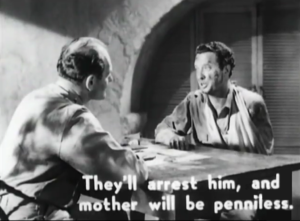 “They’ll arrest him, and Mother will be penniless!”  Now he’s shaking with terror.

“Not for months!  Don’t report him to your Gestapo!” he pleads.

“I will tell everything!  The defense works!  The new airdrome!  My mission!  The—”

And so it goes.

Why the initial interest in astrology?  The AIO was never really interested in astrology: he asked those questions to surprise the Sergeant with their bizarre obscurity, causing the Sergeant to start relaxing his emotional defenses.  The questions also get the Sergeant talking and, by chance, his answers reveal his anti-German sentiments, which the AIO then confirms.  The Sergeant also volunteers that he was an auto-racer in Milan.  The AIO hadn’t asked this, but once this information is revealed the AIO calls himself a fellow car-racing enthusiast and asks a relevant question.

(If you are wondering, Raffaele “Ralph” di Palma was a naturalized American citizen from Italy and a champion race-car driver.  His victories included the 1915 Indianapolis 500.)

The Sergeant relaxes some more, and even more when the AIO pushes a thinly veiled compliment in the form of a question: “Why is a man of your experience only a sergeant?”  Then adds: “Some officers don’t recognize a good man.”

Throughout this period, the AIO occasionally probes for militarily valuable information — “Tell me, these defense works, what are they defending?” — learning what the Sergeant is willing to reveal without being pressured.  The AIO also encourages in the Sergeant’s mind some doubts about which side he should be on: after all, the initial interrogation experience feels easy, led by a nice Italian-American who knows about Ralph di Palma, a fellow Italian who achieved fame and fortune in America, while the Sergeant himself is only a sergeant, his talents overlooked by Fascists who support Hitler, whom he despises, while the Germans “use Italians as slaves.”  If the Sergeant had fully answered the AIO’s question about defense works when asked, then presumably the AIO would have asked all sorts of militarily relevant questions to learn as much as possible.

So why didn’t the AIO begin the interrogation by immediately raising the Sergeant’s uncle in America as blackmail material?  Four good reasons argue against doing this:

— First, whatever information that the Sergeant provides willingly, without pressure, has more authenticity and therefore more credibility than if he had provided it under duress.  So the AIO keeps him talking, even if the topic is supposedly astrology.

— Second, there is no guarantee that immediate duress would work.  The Sergeant might respond with defiance, revealing nothing.

— Third, intensity.  When you place a dark color next to a light color, the contrast between the two intensifies both.  The same is true of emotions.  The AIO’s questions about astrology, then about Ralph di Palma, and then about the uncle, progressively relax the Sergeant and gradually raise him to an emotional high.  Only then does the AIO introduce the threat of the FBI going after the uncle.  The emotional contrast is sharp, terrifying, and persuasive.

— Fourth, this is a training film.  Not every captured Italian flyer will carry a letter from a relative in America.  The film must show multiple techniques, which it does.

By 1943, when this film was made, the Italian dictator Benito Mussolini had been in power longer than Adolf Hitler, and yet Italy remained the junior partner in the Rome-Berlin Axis alliance.  For Italy, that partnership ended so disastrously that, in late July, Mussolini was deposed by his own people and Italy soon switched sides, joining the Allies.  If Interrogation of Enemy Airmen was still being shown to future interrogators in 1944 and 1945, this scene of an Italian getting interrogated likely raised some interesting questions among the students.  Might the enemies we interrogate today become our friends tomorrow?  Perhaps our fictional Italian Sergeant developed some mixed feelings about America after this particular interrogation.  But instead, what if he had been physically tortured?  And then, after Italy partners with America, exactly how sincere would the Sergeant’s personal cooperation be, working alongside Americans?

In Part 6, a Japanese pilot is interrogated.