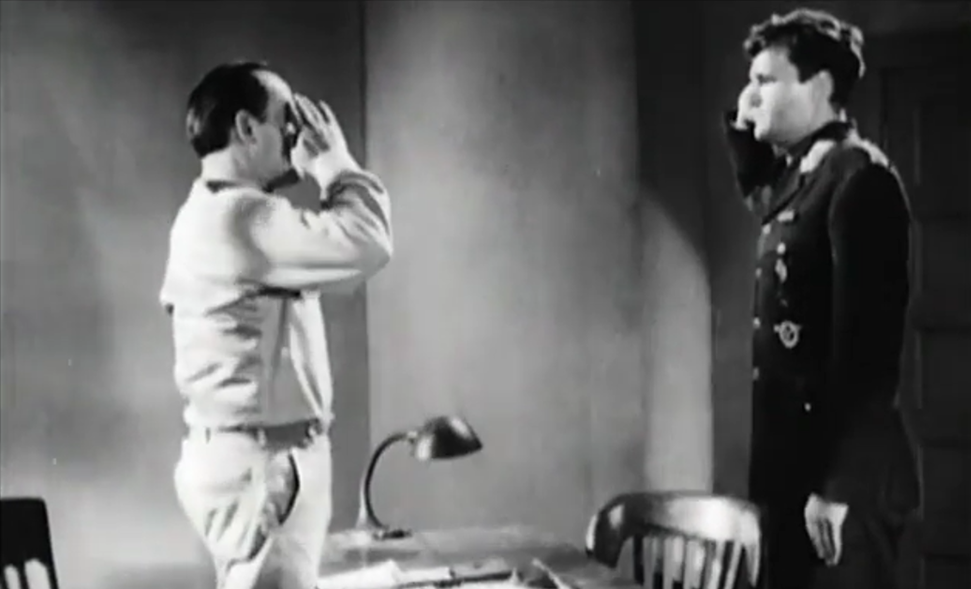 Sitting alone in the interrogation room awaiting Lieutenant Wedler, Captain Schwartz pins some pilot wings insignia to his own uniform.  The insignia makes Schwartz look like a pilot — one more little advantage for interrogating the German pilot.

Lieutenant Wedler arrives.  Instead of rendering a Nazi salute, he salutes traditionally.  Captain Schwartz stands and returns it. “How are you, Lieutenant?” he asks in German.  “That was expert piloting.”

“Thank you, Sir.”  They sit, the desk between them.

“Anything I can do for you, Lieutenant?  Some food?”

“Your men refused me food, didn’t treat me with respect.  We don’t treat our prisoners so.”

The film’s original audience knew otherwise.  And probably chuckled when the Lieutenant said that.

“I’m sorry they mistreated a man of your exceptional bravery,” the Captain continues.  “The guilty parties will be punished.  Now, one or two routine questions, then lunch.  Cigarette?”

“Let’s get these questions over with and then eat,” says the Captain.  “I understand you’re a member of KG 76.”

“No need to, I already know.  It’s a fine unit.  Tell me, is the Lieutenant Wedler, downed last April, related to you?”

At this point Captain Schwartz employs a technique meant to mislead the prisoner into believing that becoming fully cooperative would not be so bad because the interrogator knows so much already.

This is called the We-Know-Everything illusion.

“We know many things, Lieutenant.  For instance, that you flew a Junkers-52 in Russia, that your base is now in Rouen, where your KG 76 operates with a squadron of new Heinkel-117’s.”

“That’s your right.  I won’t ask you to betray anything, though I don’t see what difference it makes.  You’re fighting a lost cause.”

“Naturally you think that, but…”  Schwartz then removes a piece of paper from his desk drawer.  “I wish I could show you this…” 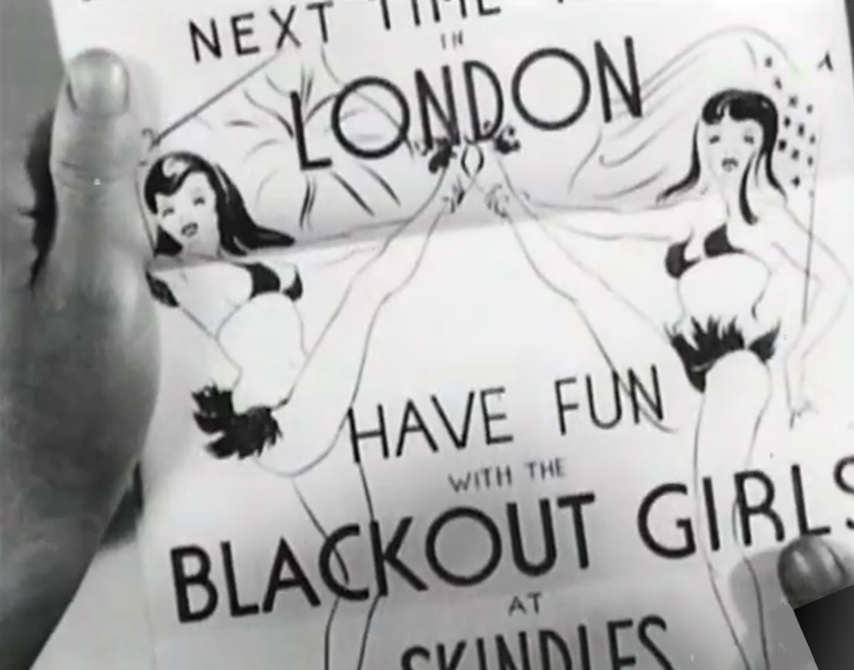 The film’s audience can see it: the page is nothing but an advertisement for some slinky entertainment, after work hours.

But the Lieutenant can see only the blank side of the page.  He doesn’t know what it says.

“Conclusive evidence of your aircraft losses the past week,” declares Captain Schwartz.  “I don’t suppose they give you these figures.”

“Whatever our losses,” the Lieutenant replies defiantly, “we have plenty of planes left.”

After a pause, he answers “Trondheim.”

If you are wondering, Trondheim is in Norway.  Rouen is in France.  In 1943, German forces occupied both countries.

“Trondheim?” asks the Captain, a little surprised.  “When did you leave there?”

“Do you think I’m an idiot?” roars Captain Schwartz. 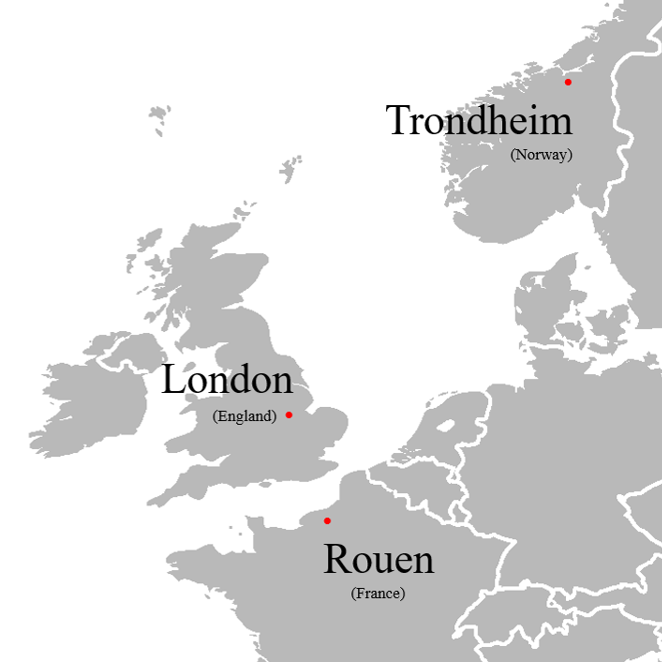 Ordinarily an Air Interrogation Officer would not lose his temper, but in this case Schwartz is portraying himself as a pilot and therefore can appear rightfully outraged at being so disrespected by a fellow pilot.  Any pilot with a good knowledge of European geography and of the aircraft involved would immediately recognize the utter absurdity of Wedler’s claim. Rouen is only 250 kilometers from the English coast, whereas Trondheim is more than 1,400 kilometers.

“Maybe your base isn’t Trondheim.  One of your men told me it’s Rouen.”

“That swine Sergeant!  He lied!”

“No, you are lying.  You realize, under international law, we can question you.”

“You Americans and your international law!”

“I could be non-legalistic and turn you over to one of our allies.”

“No, not the English, Lieutenant.  The Poles.”

Remember: prior to the interrogation, Schwartz read a file about Lieutenant Wedler that included the line Distinguished by his brutal treatment of the Poles.

For Wedler, the thought of being handed over to the Poles causes him to pause — which lasts a while.  Eventually he murmurs, “You wouldn’t dare.”

“Why not?  Unless you decide to be more cooperative?” 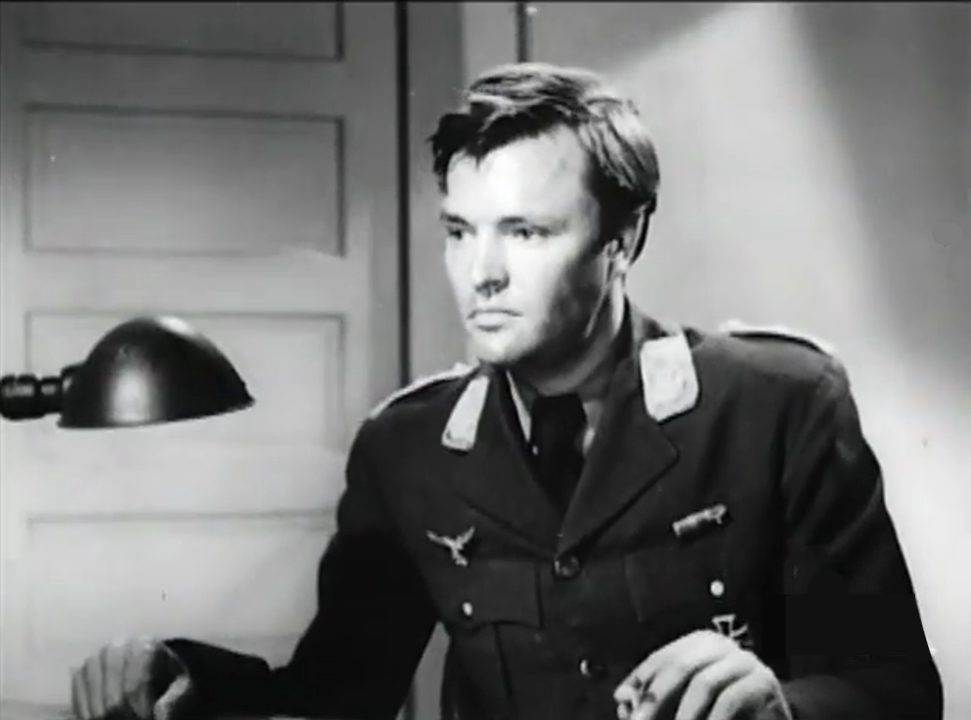 So ends this portion of the film, although there is plenty more to watch.

In Part 5, an Italian sergeant is interrogated.